More in Blacks and Technology: 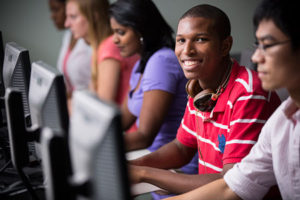 As tech leaders rally against President Donald Trump’s immigration executive order, a new report released Wednesday by the nonprofit Open Mic shows there is a striking lack of diversity in the tech industry.

The low diversity in the tech industry undermines financial performance, the report Breaking the Mold: Investing in Racial Diversity in Tech also found.

Open MIC, which advocates for a more vibrant and diverse media, found African-Americans, Latinos and Native Americans are underrepresented in the tech industry by 16 to 18 percentage points compared to the overall U.S. workforce.

The nonprofit released a chart breaking down racial diversity of the workforce in major tech companies, including Amazon, Apple, Google, Facebook and Twitter.

Non-white individuals are widely excluded from executive level positions, are less likely to get promoted and are paid less than their white counterparts, the report sho

ws. As of now, only two percent of executives in the tech industry are black and three percent are Latino.

“In a country with a population growing more diverse each day, the U.S. tech community remains a bastion of white, male privilege that has largely excluded people of color,” Michael Connor, executive director of Open MIC, said in a statement. “Given the growing social, political and economic influence of tech companies, the lack of diversity in the sector has implications that extend far beyond the industry itself.”

Discrimination In The Tech Industry

Non-whites also report isolation, discrimination and toxic work environments that lead them to leave the tech sector, with minorities leaving the tech industry 3.5 times the rate of white men.

Open Mic’s report comes on the same day a new survey by job site Indeed.com was released. The report reveals one quarter (24 percent) of 1,002 U.S. tech sector workers that were surveyed faced discrimination at the company they are currently working in due to their race, gender, age, religion or sexual orientation.

Hiring and Pay Gap In The Tech Sector

Black people and Hispanics earn nearly 18 percent of computer science degrees, yet they only hold five percent of tech jobs. Minorities were paid less than white people for the same tech position, a 2014 analysis by the American Institute for Economic Research found. The gap is even bigger when it comes to women of color. Women hold 25 percent of all computing jobs, however black women only hold 3 percent and Latinas one percent, according to the National Center for Women & Information Technology.

Why Diversity Is Good For The Tech Industry

Meanwhile, recent studies have shown that a more diverse tech industry leads to more robust financial performances. Companies in the in top quartile for racial and ethnic diversity are 35 percent more likely to have better financial returns than the national median in their industry, according to a 2015 McKinsey & Company report. An Intel/Dalberg report found the tech sector could add $300-$370 billion annually to its revenue if the racial/ethnic diversity of tech companies’ labor forces reflected that of the talent pool.

Tony Maldonado, an Apple shareholder, addressed the lack of diversity in the tech industry. He pushed a proposal asking Apple to implement an accelerated recruitment policy that would require the company to amplify the diversity of senior management and its board of directors.

“Investors are beginning to wake up to the diversity problem that has plagued the tech industry for so many decades,” said Maldonado in a statement. “A lack of diversity not only shapes the culture and future of the company but hurts its bottom line and has larger long-term ripple effects given how embedded technology is in our daily lives.”

What The Tech Industry Should Do when It Comes To Diversity

“Racial diversity is about the distribution of power. Increasing racial diversity in tech does more than increase the representation of people of color,” the report states. “It also distributes power and resources equitably, within the industry — and beyond — for a stronger economy.”

The lack of diversity could also lead to legal, financial, and reputational risks for companies, the report added.